Presents my precious, by Stevie the Hobbit Haston. 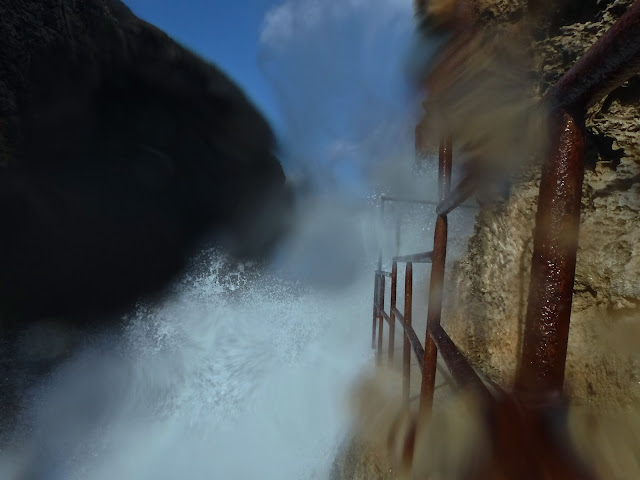 some of my routes getting washed

Its that time of year when Father Xmass, Black Friday, and credit cards get  confused, Blackxmassno credit etc, or something.
I was climbing on warn out shoes, holes in them, waiting for a supply from my friendly Mountain Boot Company, some shoes to tide me over, yeeesss Xmass arrived just on time-early. 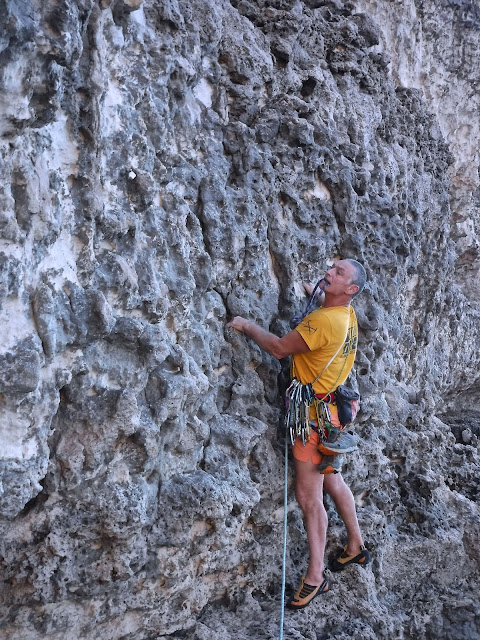 the gift of ROCK, we  will rock you into that gentle night…

Why wait for Xmass? Have it when you want, when you can, can you imagine dying on Xmass eve, and those presents being there, wrapped up and left unused! 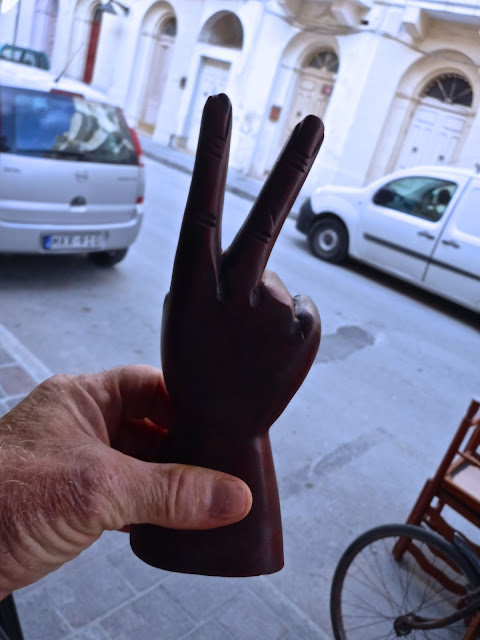 A respectful message to Buckingham Palace and 10 downing street, its in the post, my present to you. 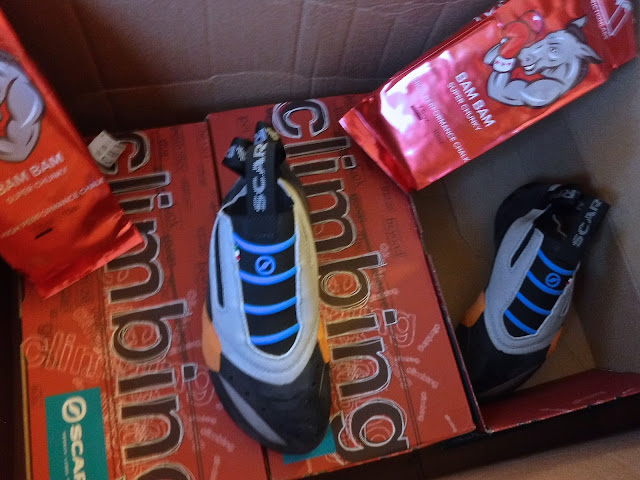 Stix boots from Scarpa UK, a well named product, 3mm sticky rubber that allows you a sensitivity that is unparralled sounds like a something else advert!

I am getting ready to face my 60th year, I will harp on about it no end, you will get bored, but I won't. I will get fit, I'll be active, I will have a productive enjoyable year, I will not wait, I will not waste, one life and you can improve it, you just need to try hard. Good food, good sleep, hard exersise, and a few nice rewards for being true to your self, and not turning in to a bloated TV watching, couch munching excuse. 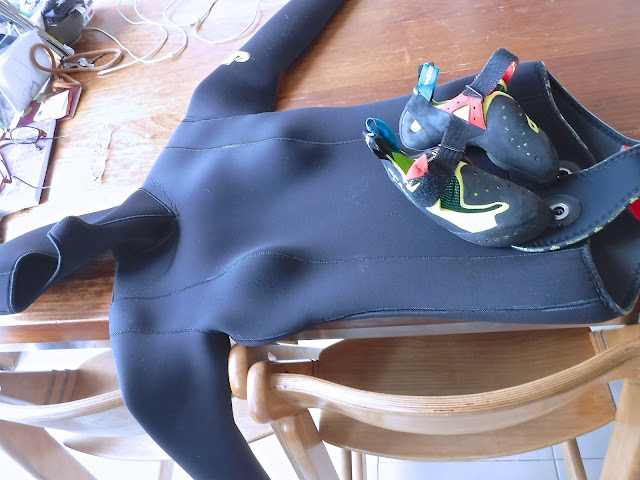 Girl friend got a tailor made wet suit and a pr of Scarpa Dragos, it's cold today, but into the sea she must go, saysYoda.

I did 10 sets of pull ups before not eating my breakfast, how's that? I'am not boasting, I'am being funny ok. I will go swimming, and diving, and celebrate my own gods today, the gods of being healthy, of seeing untrammelled things. Breakfast is postponed till after swimming, then I will eat cake sent by Her Royal majesty "lucky sperm inheritor of purloined shiny hat", who begs off the UKs poor, to do up her dolls House. Happy pre Xmass to all those Royals in the world, from Bonny Prince Stevie.

All the Presidents Men, by El Stevie Haston.

Reluctant to celebrate the death of a dictator, I went climbing, and mused on the definition of words. Just like climbing grades that purport to give you an idea of difficulty, political words, or designations are very much up for discussion, or lets discount them after all its Black Friday!  Castro good bye, well done for having the highest literacy rate in the Americas, hopefully many of the nasty things attributed to you were either false, or exaggerated. A dictator that spent 54 percent of the countries money on social services, and survived that harassment of the worlds most powerful country, must have been at least a good chess player. 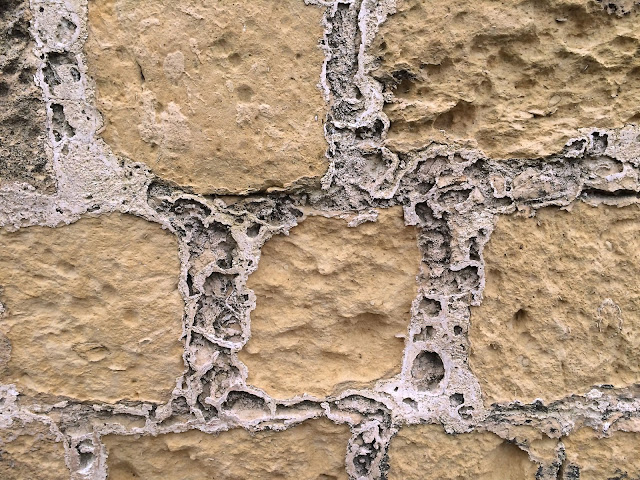 The Berlin wall came down in 1989, since then they introduced parking fees and no bivouacking at Elbe Sandstone, thus turning away climbers from their home turf
! 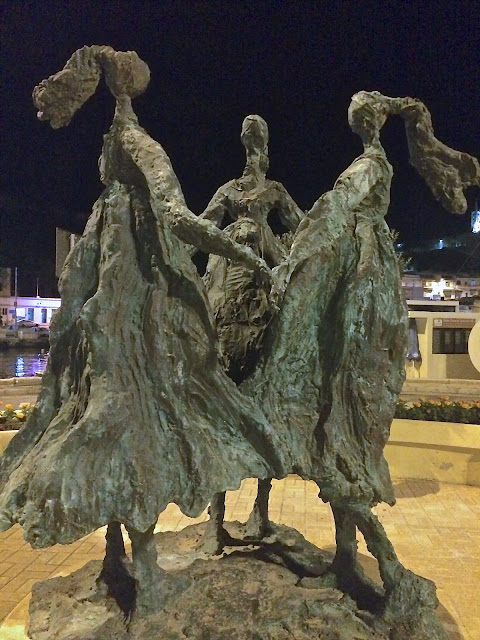 Lets all hold hands and make the world a better place.

I am not a hippy, not even an idealist, I don't even like most people, but hay what's happening in America, and the UK is gonna back fire. 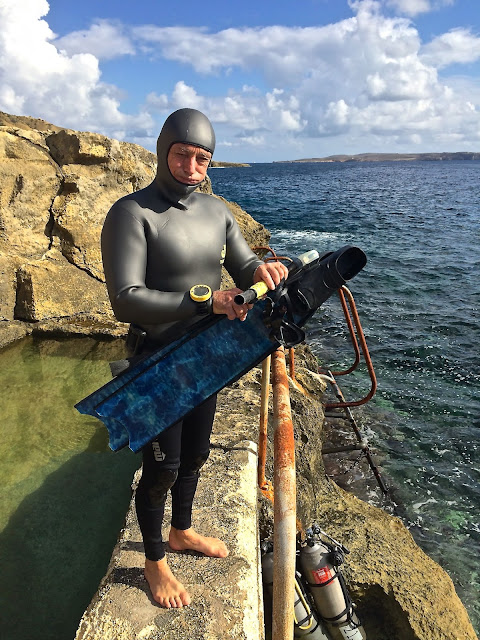 breath in from the belly, empty your head, for some people this is easy.

Fed up with the world I go under the surface of the water, peace returns, if only for a short while. When you are running out of air you can get a certain lucidity about things. The same goes when you are about to take a big flight through the air! Many people in America and the UK have reached that lucid point, they don't trust the politicians and want a Shaman. Beware the Shaman.
Shaman is a 7c+ in cave, it's very nice if brutal, and if you get anywhere at all on it, it leaves your fingers bleeding. Thats why I go free diving, death will just be a slippery glide to no tomorrow. As Tracy Chapman sung in "Talkin bout a revolution"

"while they are standing in those welfare lines", and I will add "with their money reduced and only able to buy shit food", people will get fed up, and might say "no". The Standing Rock complaint  in America which apparently doesn't see the light of day on American mainstream media is a very peaceful protest about theft, and bullying by Coporations, it is being met by cruel militarised Police! Welcome to the machine.
Posted by Stevie Haston at 00:20

In and out, shake it all about, by Stevie Haston. 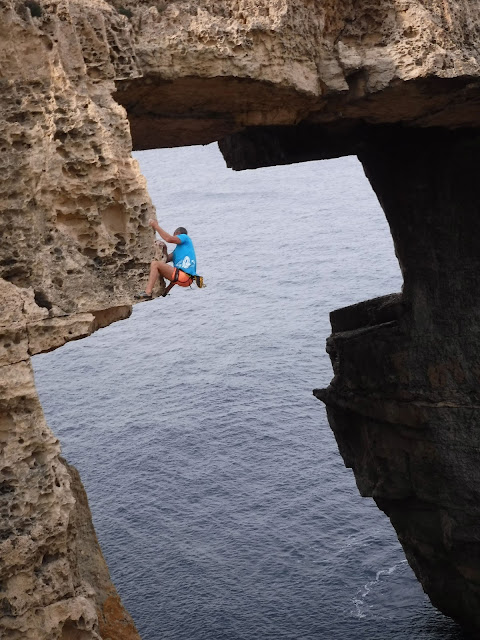 Soloing a little 6a.

Gozo has some nice little cliffs, with good ambiance. Weid Mielah is a strangely named cliff with a rock arch and generally pleasant climbs, theres a few exceptions, theres the big roof 8b, 7 knee bars in a row, and fairly hard, and mystifying unless your a Mensa Ninja. 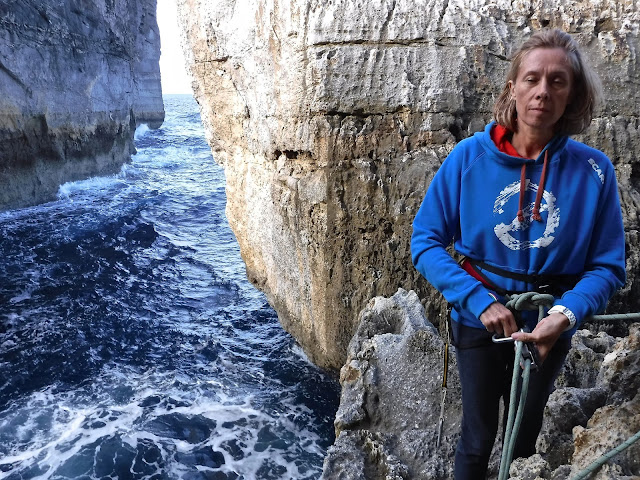 Alex looking pale and pensive, I was laughing.

Another little route with a bite, is called "In and Out", it goes into the back of a cave, and out again! Imaginativly named it is not, but after you do it, please add up how many brain cells you have left! 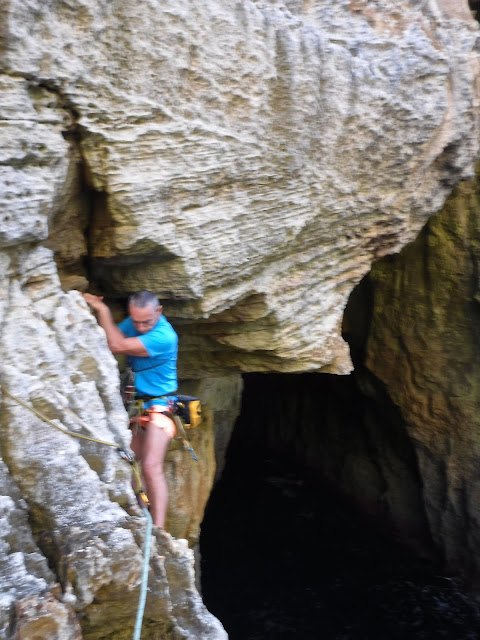 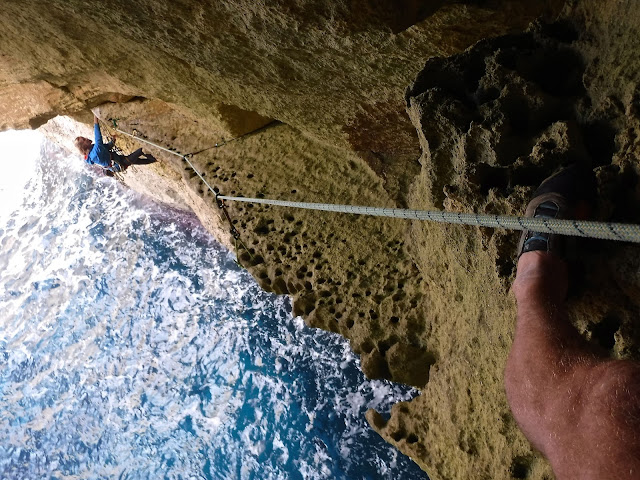 hanging on a hook and trying to get it out at the same time!

The rock is stoned immaculate, it's really special, big "Gout de eaux" which take some friends for protection.
Then there is a belly flop onto a damp ledge, and some squirming. 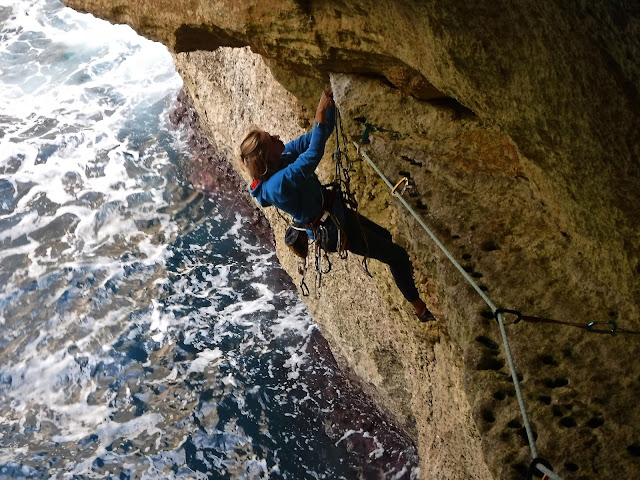 Some swearing going on, in German, directed at me.

The sea was occasionally spurting, but didn't get us wet. The whole route is better as a deep water solo, but it does have a hard move which will probably give you an early bath time. 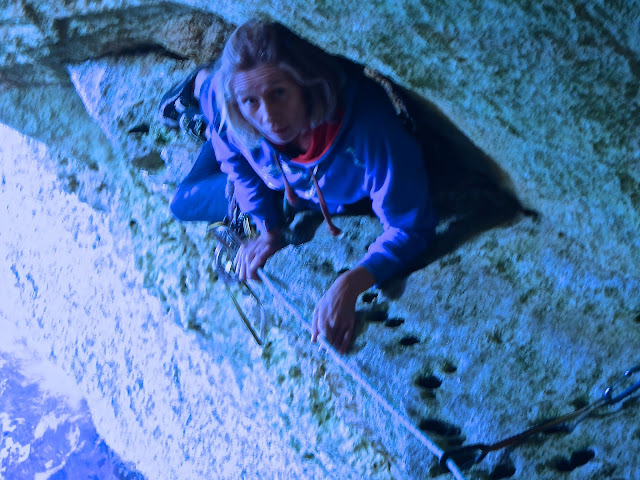 "I will kill you", in German doesn't sound that sweet.

After a sweet little belay among incredible holes, you have to go further into the cave, and bridge out, and traverse the opposite wall, it's a bit chaotic on the brain, spacial awareness goes haywire! 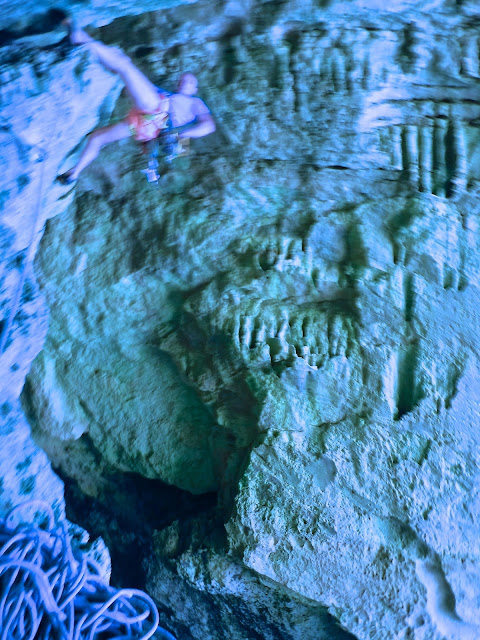 A brill photo spoilt by either the camera or a shaking hand... 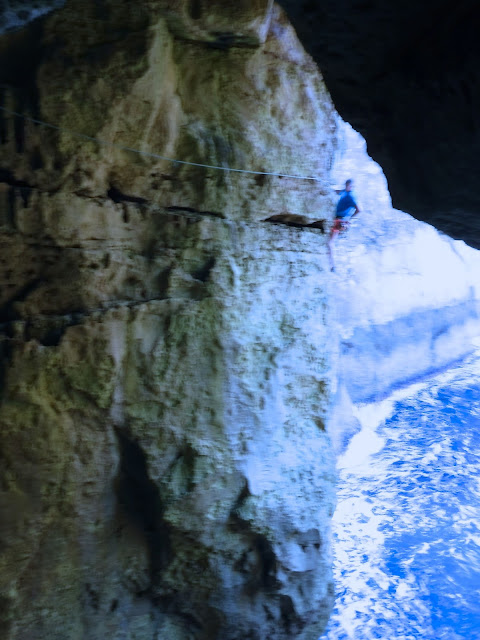 And there you have it, In and Out.

Well you have to be aware that this climb is not the sum of its moves! It is more a journey into corners of your own neurosis. I will thoughtlessly recommend it to people who have high anxiety in their normal lives, should give them perspective. 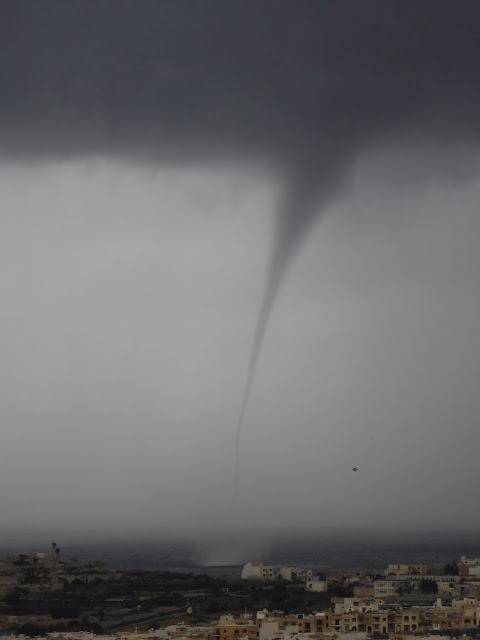 a very big water spout, its gonna suck up the non believers!

The weather has been a little bit inclement, some rain and a few storms, but hey I haven't missed a days climbing or diving! Yes I am a lucky man! A friend reminded me the other day because I was down. Well theres a lot of people who are down at the moment, so I decided to do my bit for getting people high, as it were. If you get my drift, nudge, nudge to a blind horse. I,ll do a few new routes and try a fix a few routes that are dangerous, my Pro bona work! And thanks my friend for reminding me how lucky I am. 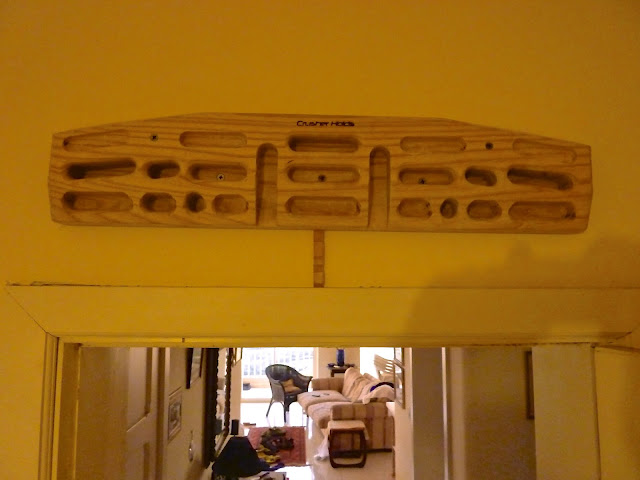 
It's winter time, and you should be thinking of doing some systematic training, or going some where, away from rain! Of course you can do both, or better, live some where better. Where is better? Some where without nasty Nazzi politicians, yes! 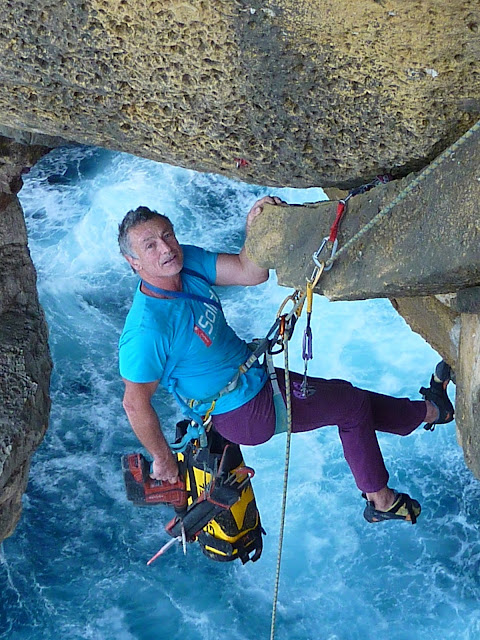 get fast on the draw donate to my Pay Pal button at the top of the page!

There's a lot of new routes on my island, but I have runout of gear to equip! Donate if you have an interest in climbing, or are thinking of enjoying some climbing on Gozo! Iave done more than 50 trad routes recently that I want to equip, plus I always need lower offs. Please think of donating if you enoy what I do or this blog.

Heres a couple of free tips, use this winter to get really fit, not just for climbing, but for all the other benefits too, like good health. Drop those 5 or 10 lbs, eat more veg.

Do some finger boarding, do some yoga, 15 mins of each will break you into a new grade on top of what you do now! Its a bargain.

Buy a well fitting pair of shoes with sticky rubber, and whisper to your self, place correctly, push correctly, propel correctly.

More fun and success from me. 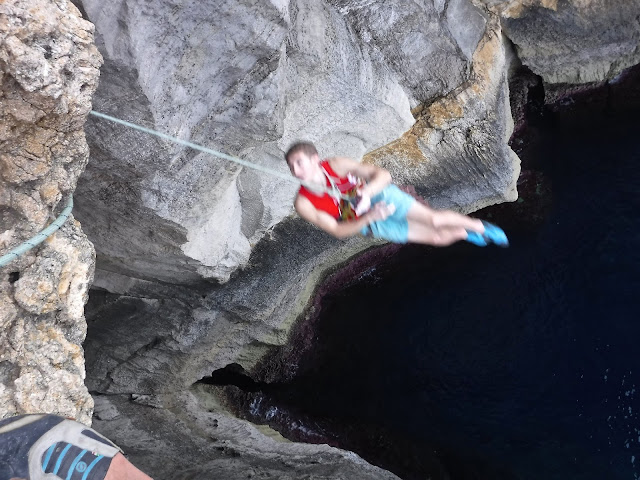 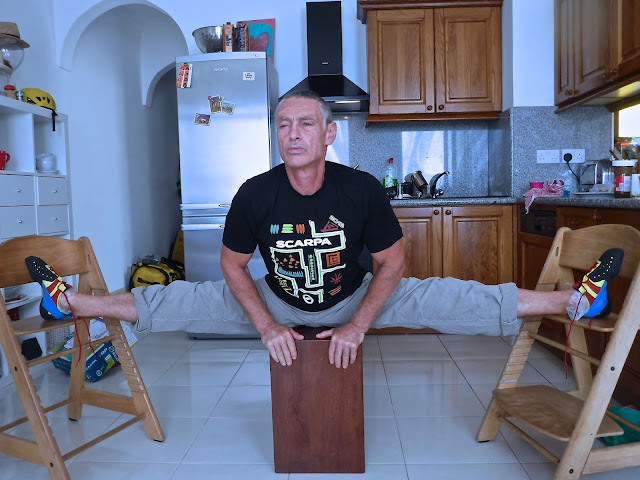 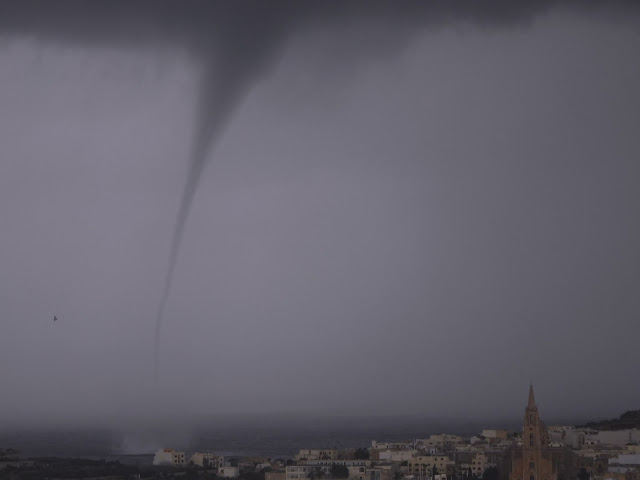 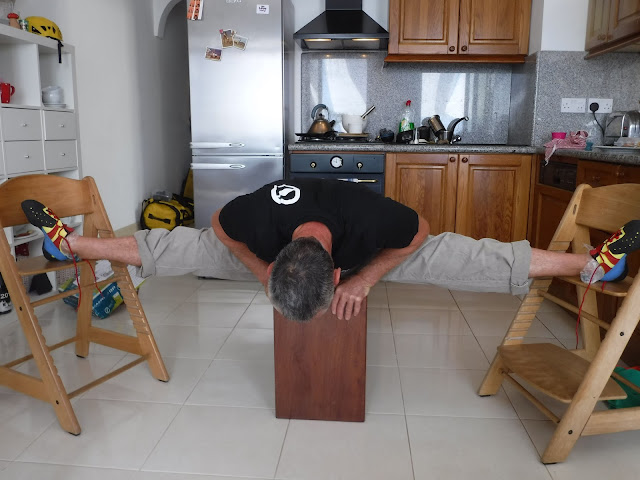