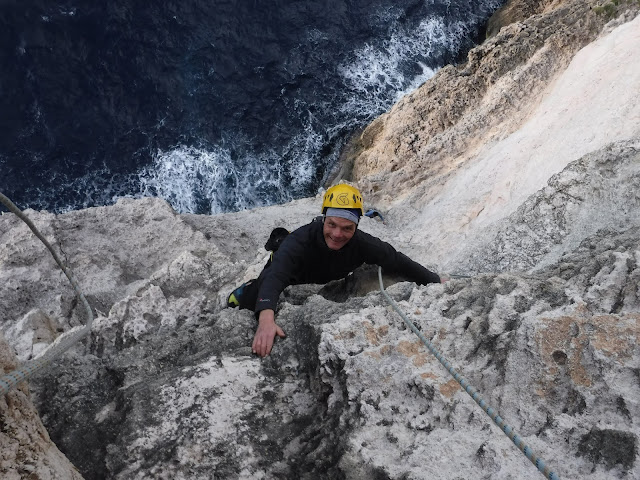 This is the route Titan, a four pitch route on the sea cliffs here on Gozo. Thats my friend Jesper, he is a resident and expert free diver, he loves climbing, but is busy doing internet diving courses. 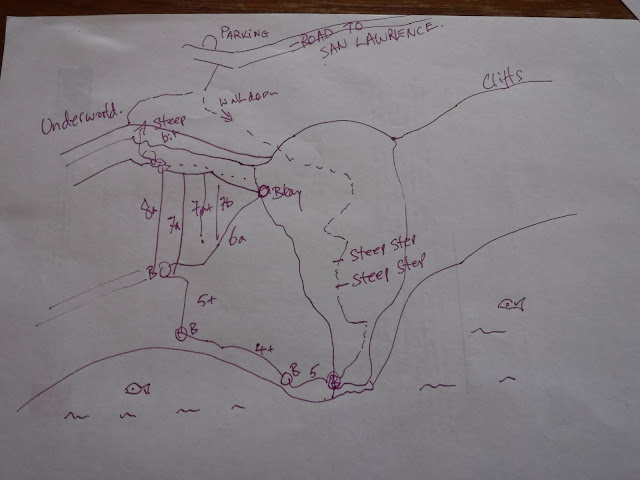 This is the topo for Titan, it is a great little route. 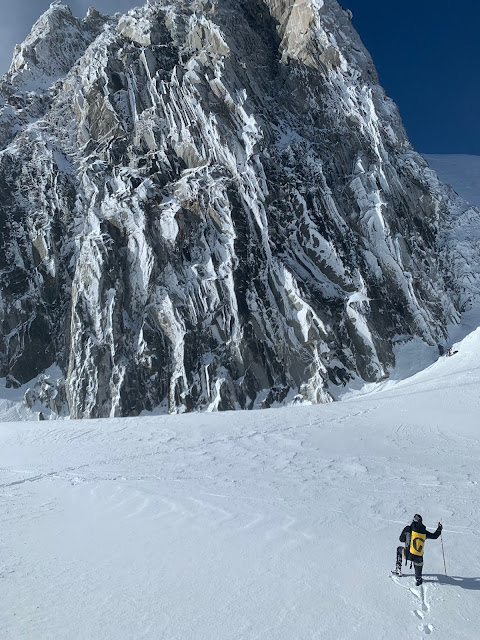 In the Alps a while ago, free traveling is a right, or was, what's happened? 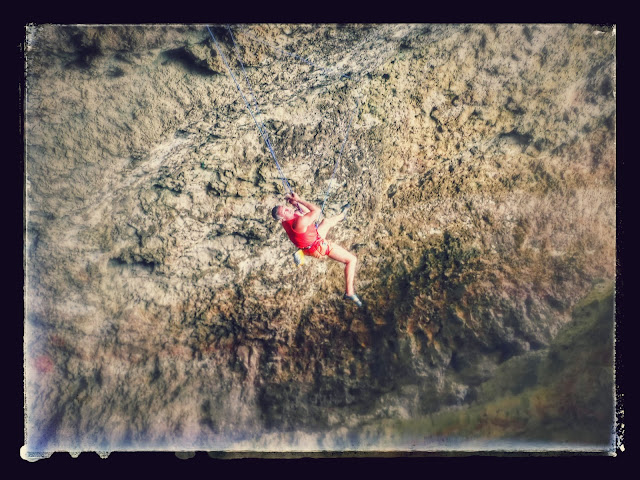 Coming out from Hell. Sometimes the rock gets very wet and then nothing works.
My Dwarf chickens on top of my pull up set up! Chickens are much more clever than human beings, these ones escape and shit on my finger board. I feel like being a French Farmer and driving up to Parliament and dumping dung on the stairs. 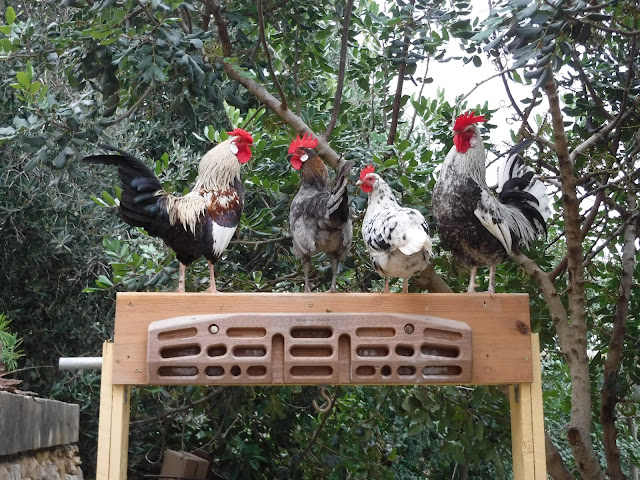 So this is the quality of my photo and there is a glitch with most things I do!!! At the moment I cant seem to do anything right, I normally get a few days like this every year but this year the bad days seem to be a year long, a plague of glitches.

These chickens have more brain power than most of the people I come into contact with. These Chickens actively try to escape!

A good climb cheers you up, a good climb is like an antidote for what makes you sick. Roll out the great routes for verily I am sick, this sickness isn't a virus, its just a real awful case of disgust. The politicians are clearly disgusting selfish twats, but that isn't new, what's new and to an unbearable and shameful level is the willingness of people to just accept restrictions to their lives to a mind boggling degree. If you had told me that people would happily let themselves be locked up for months, if you had told me that they would let people boss them around not be allowed to visit their sick, or elderly family, I would have previously told you never, only in a dictatorship, only in former East Germany or China, or North Korea. 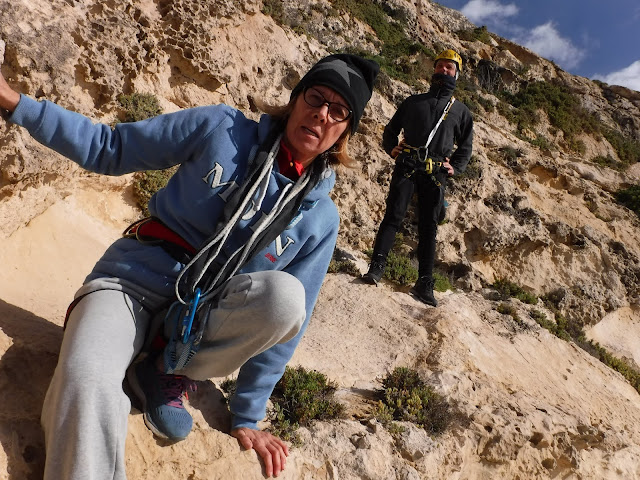 On the way down to the climb at sea level, you walk and climb down some slabs and are careful on two steeper sections.

Its going to be a year into what some people who I don't trust tell me is the biggest threat to our lives since the Second World War. I will now tell you they are lying and they have been proven liars in the past and I have no evidence that they are telling the truth this time! I have seen no piles of dead in this great year of the Plague, I dont know a single person who has died of Corona in this terrible time. In my street nobody has died, in my village nobody has died, no plague visible, perhaps else where, but certainly not near me. A few doors down, a man I used to say hello to fell under his tractor, we couldn't even go to his funeral! 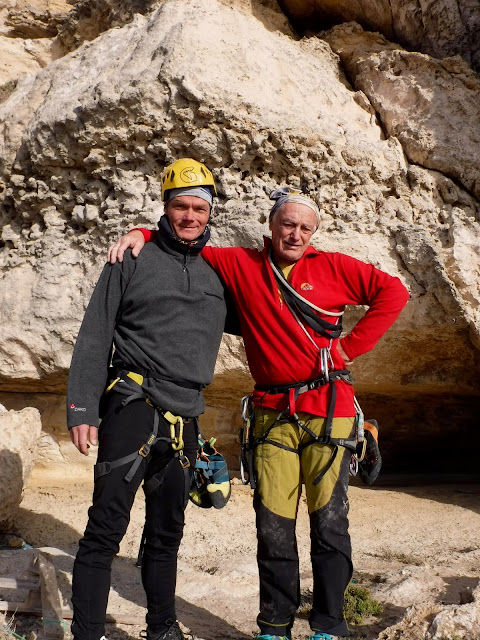 A diving friend, his first multi pitch, a big imposing cliff accessed by two traversing pitches, we had to wait for rough seas to subside. 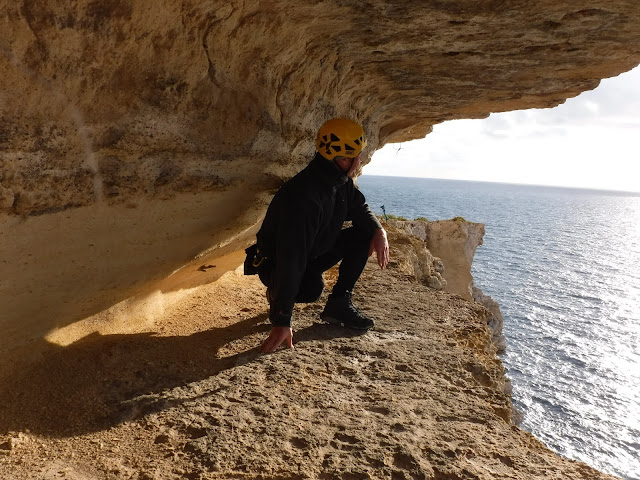 This is the way off the climb, my mate stops to admire his surroundings, he is impressed, he climbed 4 pitches 5, 4, 5+, 6a. Terribly happy he is thinking of stopping his 10 year business, he is terribly happy until he thinks about what the hell to do with his life.

Climb and Dive I say, breath, and take joy in holding your breath underwater, talk to fishes, talk to the sky. 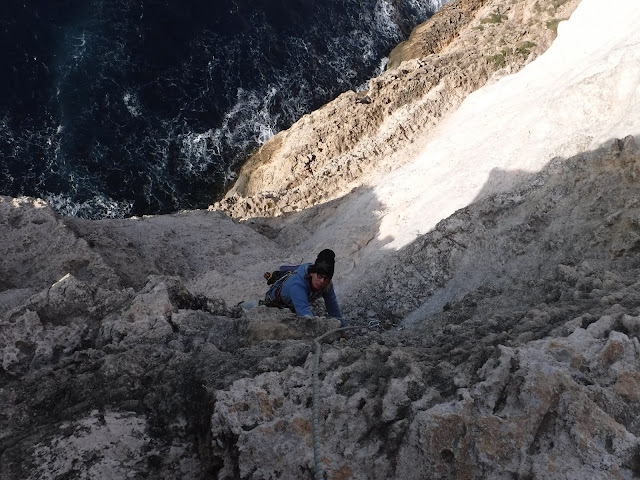 Alex looking like a smurf, she walked up the route smiling, dancing on the splendid rock, bemused by the super dimensional freedom. 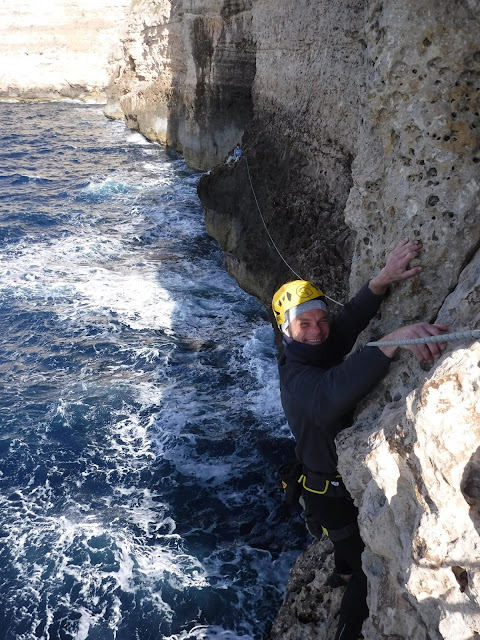 Caught between the sun and shade, betwixt the devil and the sea. 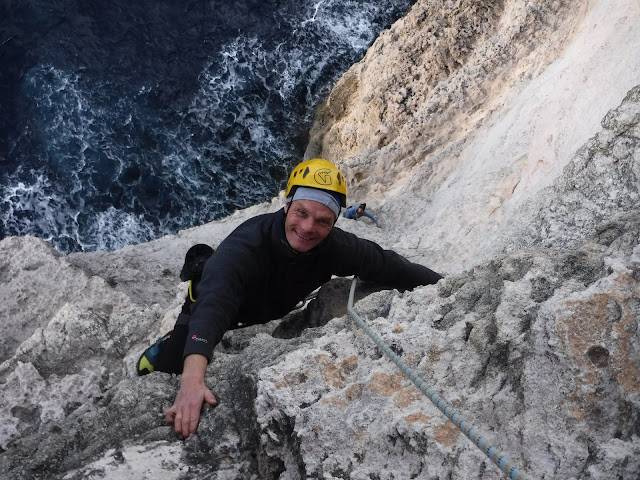 a 40 meter pitch, a beautiful long delightful gritty slab, with a couple of steep interesting bits. 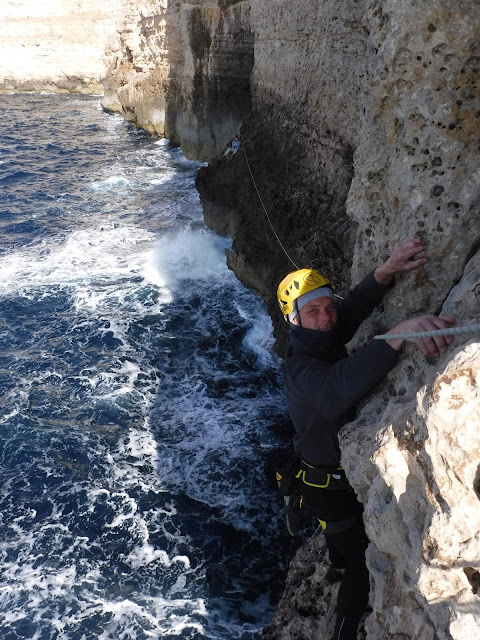 I like this photo so much I will force you to look at it again. 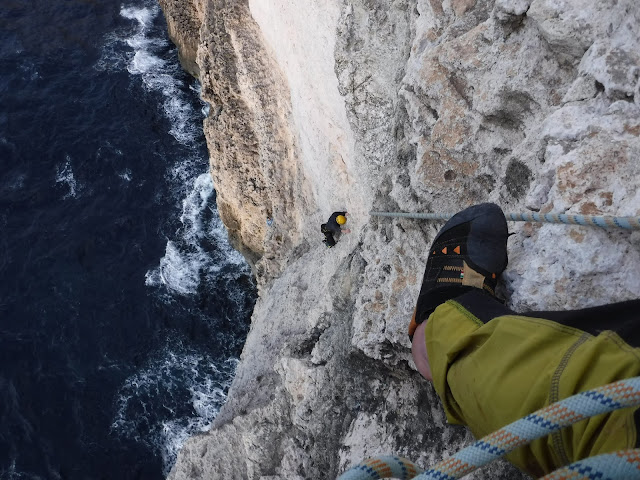 Looking down the Titan 40 meters wonderful rough rock, behind the climber the wall gently overhangs, it has a 7b, a 7a+, a perfect 7a, and an 8a, hardly any visitors in a normal year, and in this extraordinary year of the plague no one! Forsaken, forgotten, but perhaps even more fantastic than ever because climbing is the antidote.  Climbing for me and most of my buddies is freedom, its the embodiment of your own autonomy, climbing is like breathing and smiling, and yes like making love, you cannot out law it. Some of my friends in France were hunted down by their own friends in the rescue service at great expense to the taxpayer, that's right brother hunting down their own brothers for enjoying a communion with their special place. The Eiger was once a banded climb, now in many countries every climb is banned. Some climbing clubs and governing bodies have told their members and non members not to climb. If you want to defriend me please do, if you want to 'Cancel' me please do. Life is not life if you are locked up watching Netflix Bollox, life isn't that great for me most of the time, but now at the twilight of my life I want to work, yes you heard that right, I want my normal right to work! Fight for your right to party, fight for your right to climb, and breath fresh air instead of your own farts, do not go into that dark night of compliance.