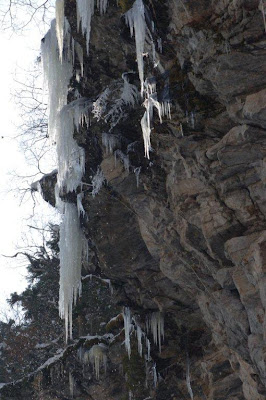 Years go by, and you do little. A whole life can go by in the blink of an eye, without a single glorious moment. Even when you do climb well, most times, it’s just filling in the dots, and dashes.
The last new route I did, is different from the ordinary, it’s very fine, interstellar, galactic, cosmic even. Why so? 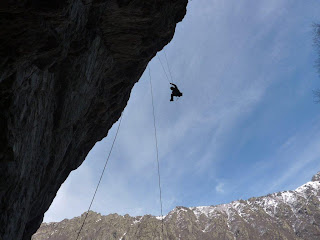 
It is on wires and friends on loose rock


It finishes with 15 meters of ice


Yet you do two thirds in rock shoes 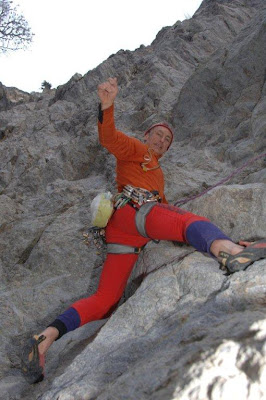 
I am proud of this little gem, happy that I made the considerable effort to do it, happy I did it ground up, and took many falls. 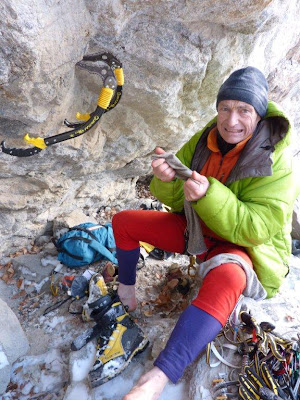 It’s called Cannibis, and there must be other routes to do like this.

I very rarely do anything significant, but this is a masterpiece. If all our days were this productive, it would be more joyful for sure.
Question, Is it a mixed route? Ans, Yes

In future we might get a crampon that will be fixable with one hand more easily, and very complex hybrid climbing might be easier. At the moment boots and crampons take a bit of time to fit. On this route I was lucky to have a ledge to change, otherwise this route would have had to have been, dry tooled, and aided , or 1 point of aid to change shoes. Also this route may have been too hard for me to climb ground up with the additional burden of a pair of axes, and a pair of crampons, additional 2 kgs + rack of friends, draws, etc. This additional wieght is getting too much of a charge for a route over 8a. Well for me, it is! However on easier routes many things should be possible. Climbing is still evolving, eh?
Viva la revolution. 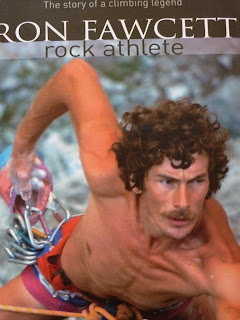 This book is about the great climber, ‘Big’ Ron himself, it was written with the help of Ed Douglas. It’s very good, down to earth, and deals with very real things, besides the climbing. If you were a climber during these years, 70s thru to the early 90s, it is essential reading. If you are younger, it will defiantly help you understand this important era, and one of British greatest climbing statesmen. Well done, top marks. A longer review of mine can be found on a UKC.
Posted by Stevie Haston at 04:54 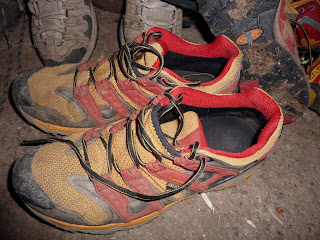 Banal, deluded people, in an ordinary world, by Stevie, the elitest Haston 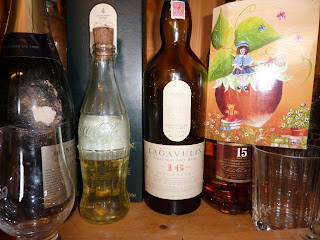 Please read, and fill in the following questionnaire. Equipment necessary: a pencil, a piece of paper, a brain, oh yes, some honesty. And, if you fail the test, an extremely sharp knife.

Do you wish to climb all grades, not just easy ones?

Would you like to be able to do only a few climbs, because of lack of ability, or being able to do nearly all the beau routes anywhere in the world?

Would you like to be a hunch back with a foot long nose, or ok looking?

Is a crowded beach in Benidorm, the same for you as a deserted beech in Madagascar.

Is the climbing wall you go to, the same as Ceuse in the early spring? Which do you prefer?

Have you ever snowboarded the Mont Blanc in a foot of  powder with a blue sky, no tracks?

Is Ben Nevis as awesome as Lhotse South Face?

Are you happy when you work in a stuffy office staring at the clock?

Do you like Columbian Cocaine, German motorcycles, Swiss trains, French wine, sunsets over the Utah desert towers? Or are you happy with instant coffee, and living in a cockroach infested bed-sit in Glasgow?

Do you think it would be handy to have a few stray millions of euros knocking around in your account, so you could eat well, house your self well, look after your neighbours a little? Or do you prefer scratching a living from day to day, worried sick?

Do you occasionally wish your wife’s bottom, was less like an overstuffed leatherette sofa, complete with button dimples?

If you would like to be an elite person with an extra ordinary, multi dimensional life, take the blue pill. If you truly wish to be boring, I advise you to ritually eviscerate yourself.
Posted by Stevie Haston at 04:50

Sticks and stones may hurt your bones, but words will never hurt you. You’ve obviously heard that one, haven’t you? Well when I heard it in a class room, I quickly interjected with ‘what about giant turds’ I was six, my deaf teacher asked me what I meant by ‘thirds being able to inflict harm’, I gamely repeated ‘turds’, ‘ah turds’ he uttered witheringly, full comprehension dawning, ‘yes indeed’, and here pausing for breath, he clouted me a good one behind the ear, ‘turds can be hurt too’. There had been giggles at my childish interdiction, but now large guffaws where everywhere.
Today many people act and talk in a completely different way to how they think. There is a tyrannical political correctness, and a false faceness everywhere you look. Even when you look in the mirror?
Any way don’t mention the War.
In 1889 the Mauser riffle was introduced and it passed into a deadly service thru two world wars, and was even seen in the hands of the Muhashdeen more than a century later. I have been handed a Mauser that has passed through generations of hands by a Pushtu in Pakistan, and told with gleeful pride of its use against the British. It’s a nice practical breach loading riffle, but its date of issue has now passed into the German vernacular, as a term of bog-standardness. So if you are described as a 1889er, you are ordinary, a kind of dumb shmuck. We are all ordinary in some way, we are all 1889ers! Most climbers in Britain of course, are 1889ers, you know just punters! So anyway, the Mauser, was a word that could, and did, and still does kill you.
Testing the climbing WC 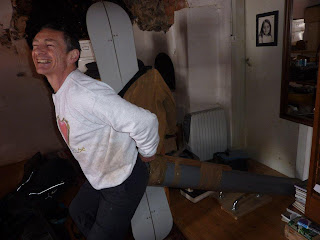 So, back to, turds. In Yosemite national Park there are lots of regulations about stuff, including them making lots of money out of fat people driving around the place in petrol guzzling cars, and motor homes, in a permanent head to tail conga of pollution and congestion. Climbers of course are not even welcome, despite the fact, that fatso from Fresno wants to see dudes hanging off their fingernails, as free entertainment. Anyway you are not allowed to shit in the woods like a bear anymore, but have to dispose of it in a thoughtful and prescribed way. So if you are on a rock climb you have to excrete into a bag, and then carry the turd in a ‘plumbers plastic pipe safe’, and dispose of the odorous contents down in the valley somewhere. The non-carrying of a plastic poop rocket opens you to prosecution. The old method of dunging, was to lower your keks and bombs away. You also had a private chuckle as you watched Fergie from Phoiniwx’, with her expensive binoculars flashing in the sun, as she watched you from the valley floor.. If you were a more concerned individual, you did your number twos into a brown paper bag, which you could save, or jettison onto some poor passer-by. The latter was deemed the more correct method of dispersal by a high percentage of the best climbers, none of whom, would of-course admit to doing anything so utterely disgusting and childish now.. At night the tipsy, or completely boxed out of his cackling brains climber, might add a glowing touch to the ensemble by setting fire to the brown paper bag before flinging it into the void, thus he would create a ‘Shitorite’. Several Shitorites together would constitute a ‘Shitorite shower’, which would then streak thru the azure Californean sky to sublime effect, and to wild cheers from the loons on El Capitain. Similarly, ‘Gardeloo’ from Gardez-vous, was the cry in London centuries ago before fitted toilets, when the uncouth would throw out their night soil, and other unseemly unmentionables, This, is where we get the word ‘loo’ from. It is very sad in my opinion that Loo, and Dream Canyon Handshake, have passed into our lexicon, but not the sublime, Shitorite Shower.
Posted by Stevie Haston at 04:46 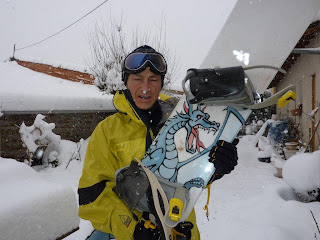 It’s dumping, and I’am writing indoors. Three writing assignments this week, seriously thinking I might go back to building, the stress man. I just got a face facts, I hate any kind of work, or routine. My Jamaican DNA with it’s work ethic completely striped by partying away in the 8Os, is slowly surfacing once again. Bummer dude, I was just getting into looking at catalogues and dreaming of that fitted kitchen. Slipped out from work like a naughty child, walked the hill did a couple of little runs, jumped some barbed wire fences. Chickens are wondering what the pecking hell is going on, and so am I. The daffodils were just about to blossom. Maybe do a little ice tomorrow.
Posted by Stevie Haston at 06:27 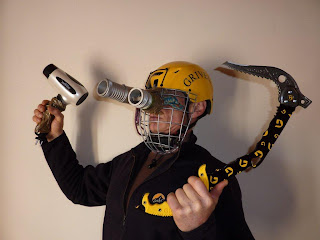 Ooogeling thru a climbing catalogue, I came across what I though might be a useful device for Scottish winter climbers. A new product from Dark Sapphire training and gear Co, called Rime Rimed Tec Specs. Looking a bit like old glacier glasses, these handy, if expensive devices, allow you to winterise any situation. First intended for military use, they could change a pavement into a glacier, if the user was of low intelligence, or on medication. All very useful I thought, for Scottish people who haven’t been to the Alps. But this isn’t its prime target area, dry tooling is deemed its real niche, and I must say its brill. Around the rims of the spectacles is a bit of rime, not too much you understand, just the right amount for you to be deluded into thinking your rock climb is in condition, but not too much rime, so you can’t see the hook placements. Brill, certainly a five star product for virtual climbers. Worth every penny, especially to tight fisted Scots who don’t wish to travel, or wait for better conditions.
Posted by Stevie Haston at 05:51

Black or white, by Stevie Half Caste Haston In the photo is a little unrecorded route. This pitch starts classic mixed then goes into an M9++ bit finishing in a very dangerous way. It’s a few big pitches off the ground and is delightful. This year has seen a lotta good routes, stay safe.
Posted by Stevie Haston at 10:04