Fishermans and Pirates by Stevie Haston.

It's getting hot on the small rock I live on in the middle sea!
You must in the shade climb says Yoda. So we went to Fisherman and Pirates sector. We even met one of the fabled climbing fishermen! 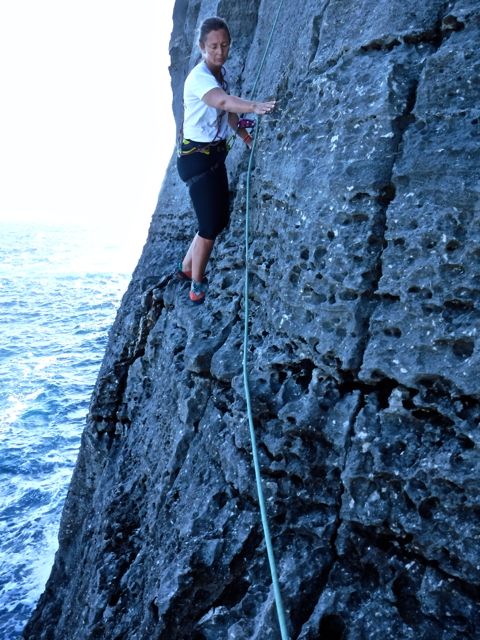 Christina climbing towards me.

At the moment the wind is a bit odd so its choppy and you must watch the swell which isn't the same thing-thank god we don't have tides to deal with. 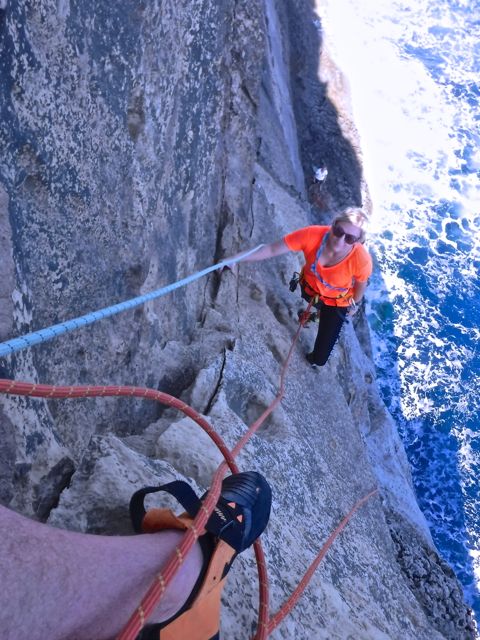 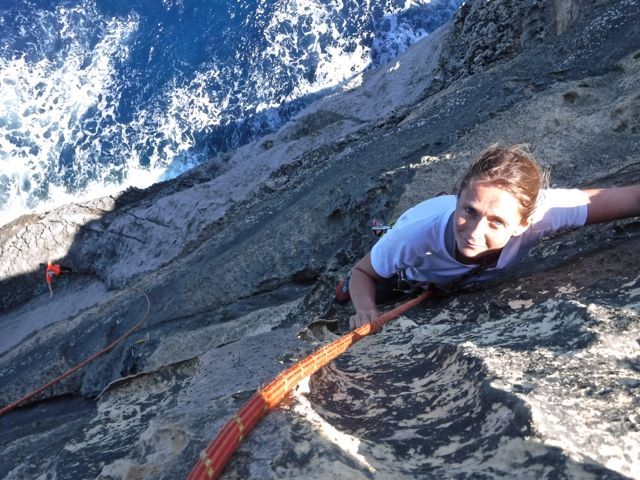 Christina, giving me the evil eye as I take a photo of her as she embarks on a tricky but beautifuly sculptured finish. 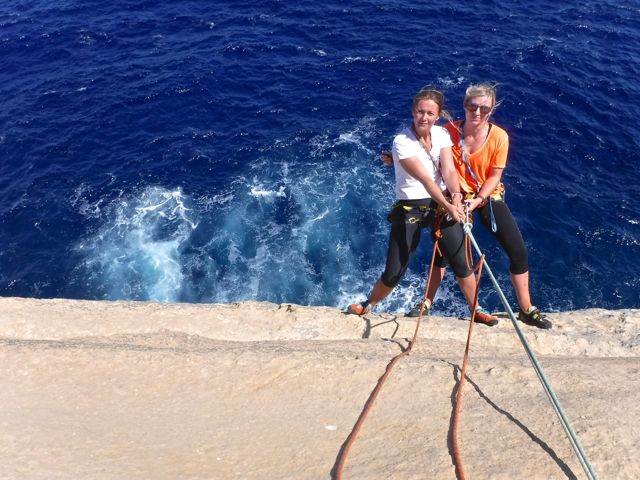 A bit of hanging belay practise for the girls to show them how awkward things get.

The Summer Trade show was great, saw lots of good equipment from the Out Door industry. Saw lots of friends, who are still active happy and alive! 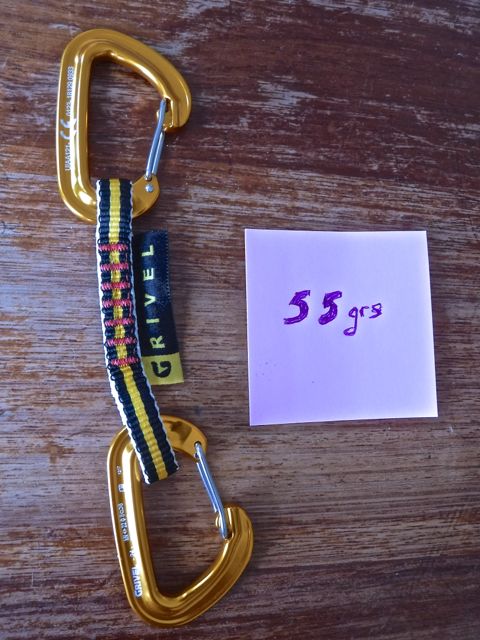 So what pleases me-lots but I'll keep this simple, cos simple is often best.  Clever stuff that makes climbing or any other sport more fun.

Are light carabiners weaker?  Not the Grivel one above, its 22kn across the major axis and gate open 8!

Is it hard to clip, not for me. Yes I am an expert but its easy to improve your game. Clipping biners is not an a mysterious art form its a simple learnable process like easy climbing. Learn and improve! How much weight do you save? You save a bit is the real answer, but that bit is the bit you carry! The weight you save is the bit that pulls your ass down on an overhang!

If you chose the right gear everything from packing your bag for that flight to the walk up to the climb of your dreams becomes easier. Easy!
Posted by Stevie Haston at 02:45

So, I am on the road to the Summer Climbing Trade show, but thought I'd give you a few photos of why there is an Out door show! 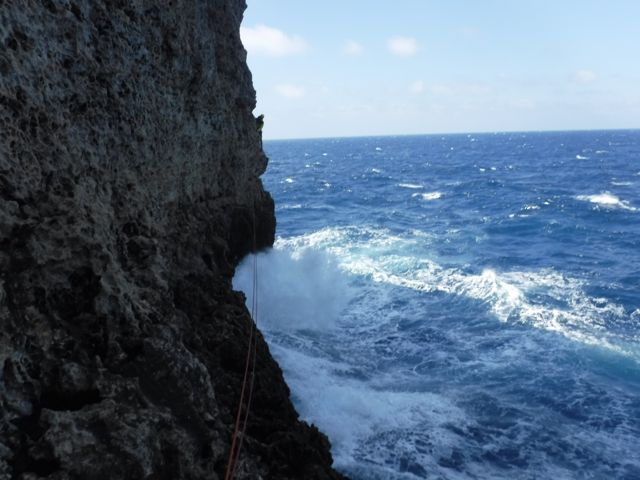 Ali following, he can't swim that well,so he is a bit scared! 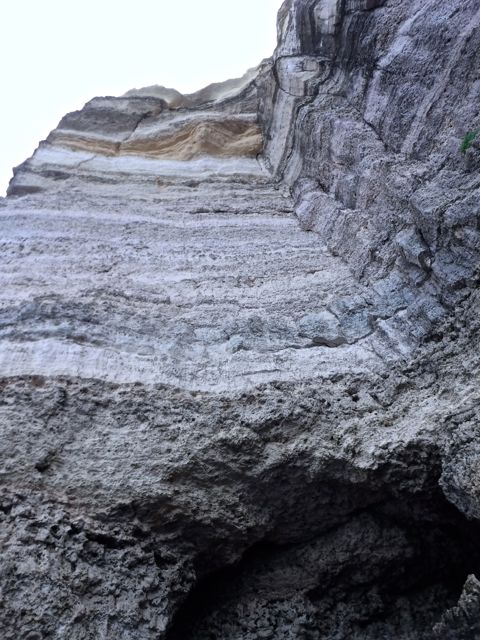 A 70 meter groove that got away, it's very neat and tidy, will go back! 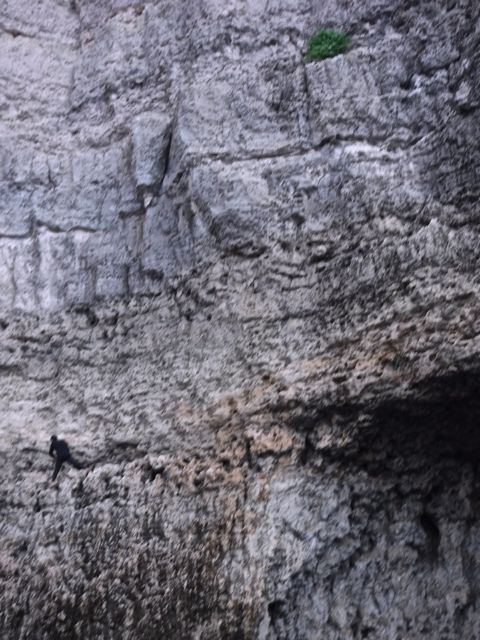 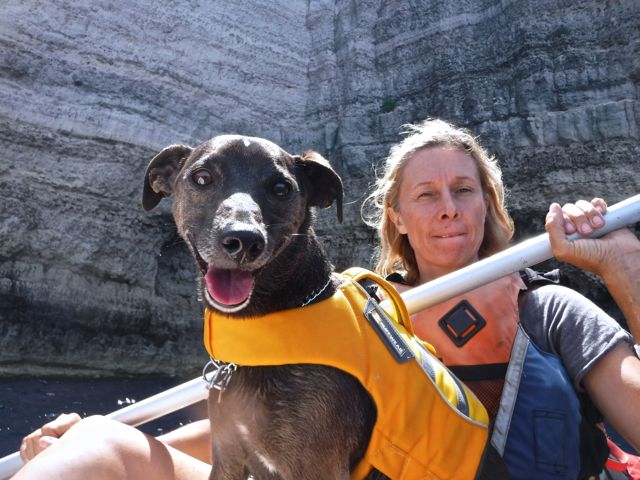 Diego the dog, he is a few kilometres away from his food bowl, but he does like swimming and climbing. 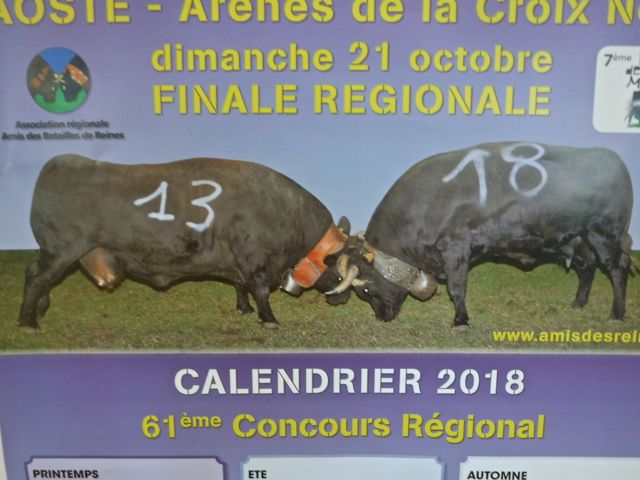 In the Italian cafe yesterday, I noticed this, its a farming thing, the big girl cows are scary, they joust a bit, and its a spectacle, not sure about it, I went once, and it was ok, lots of drinking etc.

So as if sizing climbing shoes isn't hard enough, it is getting hot and the problem gets bigger! 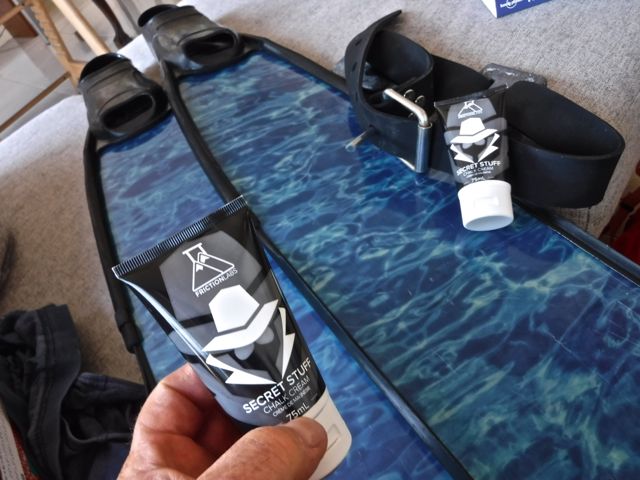 Secret Stuff is effective for lots of chalk use, use all the secrets of climbing and use them well. The end result is did you clip the chains and have a good time! 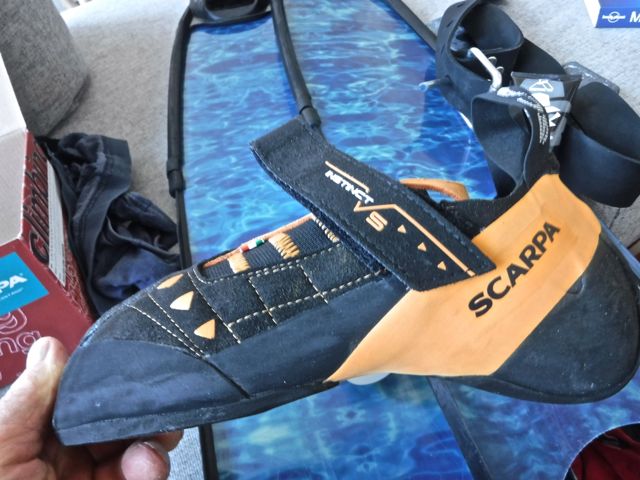 Right nitty gritty time. Shoes have got better recently, they have got very very good! Thats good news. There is no bad news. There is a problem though, climbing shoes pinch, hurt, or are trouble some to some degree. Again the good news is that this problem is almost gone if you climb lower grades. If you start edging or toeing harder grades you enter the twilight zone of differing degrees of discomfort. The modern thought is that shoes are so good that it has almost disappeared-well. Discomfort is dependent on a number of things, mainly you fitting in to that tight shoe brilliant climb harder shoe. 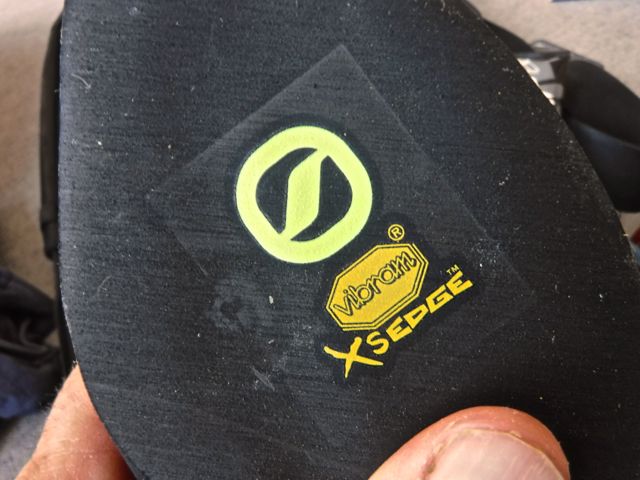 Edge rubber, brill in that it gives good support and better edging and will last longer but it won't stretch as much-OK. 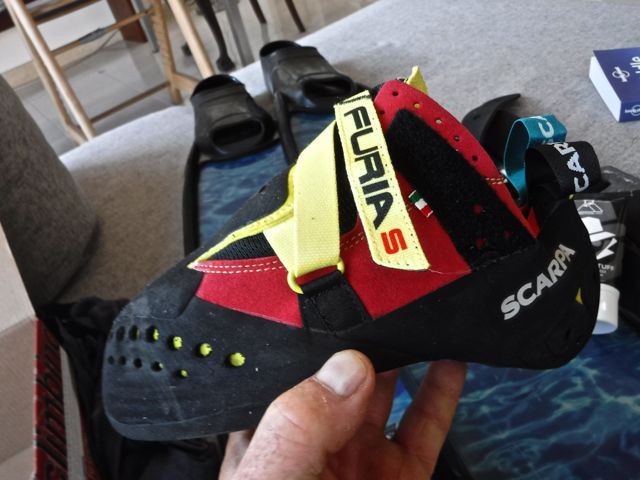 A soft shoe is the opposite of what beginners choose but could be the answer. Why lots of reasons but mainly it gives and is kinder to your feet. 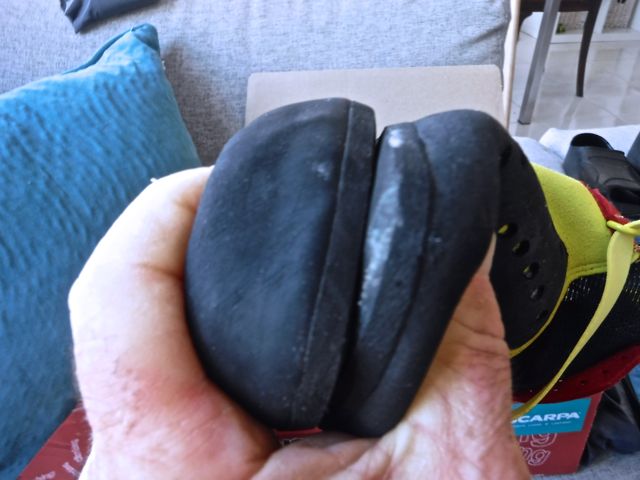 Width matters! Above are two shoes same size in this case a 41 but different widths, which one do you want to be waiting on a hot day? 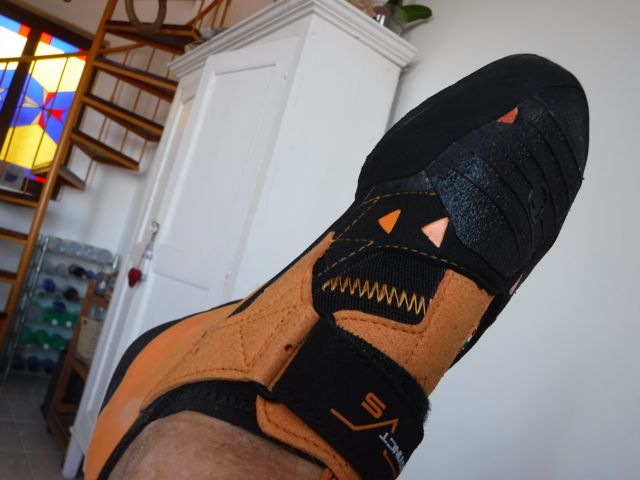 Instinct VS from Scarpa is a brill boot which fits my foot really well, and is the perfect fit for me, but I normally choose a shoe with softer rubber, and synch it up tight because I have a foot with special odd places, so I have trouble outside edging.  I can also tolerate some pain, so I go with pain. In summer (here it is very hot, 30°C) I like a shoe with a bit more room, and I normally don't climb very hard in the summer anyway.

Are you unimpressed with the Nose record? I don't have any hidden agenda, its just a question! Where you less impressed with it coming down a few days later, and then a few days later again? I was fairly astounded by some people remarks that speed was dangerous particularly John Longs. John Long was largely responsible for starting the whole shebang with their drugged up one day ascent four or five centuries ago! 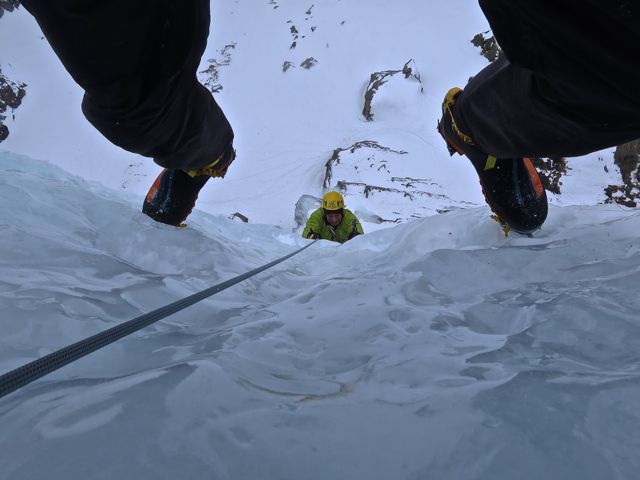 Ice is beautiful and nice, its more dangerous in a drink than when you climb on it!

The opinions of journalists, or ink sellers, and other assorted writers should not be taken as truth just because they are good at putting shiny nice words together. One climbing writer who I like is against abortion, should I never read his stuff again? I think I will. One writer I like tells massive fibs! Shall I read his stuff, I think I will, but I have always regarded it as fantasy, or fiction. The Nose record to me, is just the record for 880 meters of steep granite in a restricted park, in a politically dubious country. Still it's fairly impressive, the Eiger times are way, way more impressive. And if you think I am anti Yank you are wrong, the Freeblast solo was a record that seriously impressed me. Selling words is a funny thing. Climbing Mags are not, and never were good at it.
Posted by Stevie Haston at 23:05